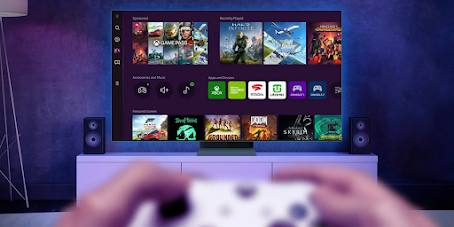 The "Gaming Hub" function, which Samsung had previously promised will be available on its Tizen-based smart TVs, is now operational and will initially enable cloud gaming via Google Stadia and Nvidia GeForce Now.

The "ultimate home" for all things gaming is the "Gaming Hub" on Samsung TVs. It can offer quick and simple access to a local console and a variety of other gaming materials. The Hub suggests watching videos of gameplay, game trailers, and other things.

However, this mostly serves as a hub for all of your cloud gaming services.

Recently, Samsung and Microsoft proudly said that this would be the first method of playing Xbox Cloud Gaming on the TV without having a physical Xbox console. But on launch day, two other options will be added to Microsoft's.

What hardware is supported? Samsung claims that its 2022 portfolio will have Gaming Hub, mentioning the following in particular:

After a software update, namely version 1302.5, the Gaming Hub will be available for compatible devices. At launch, the Hub will enable streaming from the aforementioned services as well as Utomik. Unknown cloud gaming service Utomik focuses largely on the PC game industry in Europe.
Additionally integrated with Gaming Hub are Twitch, Spotify, and YouTube.
As you can see in the image below, The Hub pulls game suggestions from supported providers into the "home" page.
How does Samsung Gaming Hub work?
Although we were able to confirm that Stadia would still support the Stadia Controller, Samsung claims that you'll need a Bluetooth controller. "All of the most popular" controllers are supported, and you can link audio accessories as well. Playback in 4K60 resolution is also supported for Stadia. Lower latency will be offered to GeForce Now subscribers utilizing the RTX 3080 tier, however Nvidia made no mention of 4K capability, meaning that it is not available.
This release follows the expansion of cloud gaming to additional TVs during the last two years. Both Google Stadia and Nvidia GeForce Now have expanded to include Android TV and LG smart TVs. Although Samsung's platform will be Amazon Luna's first major expansion, it is also supported on Amazon's own Fire TV platform.
Tags
Gaming Hub google Samsung
Related Article